What Americans Bring to The Table in Uganda’s Investment Market 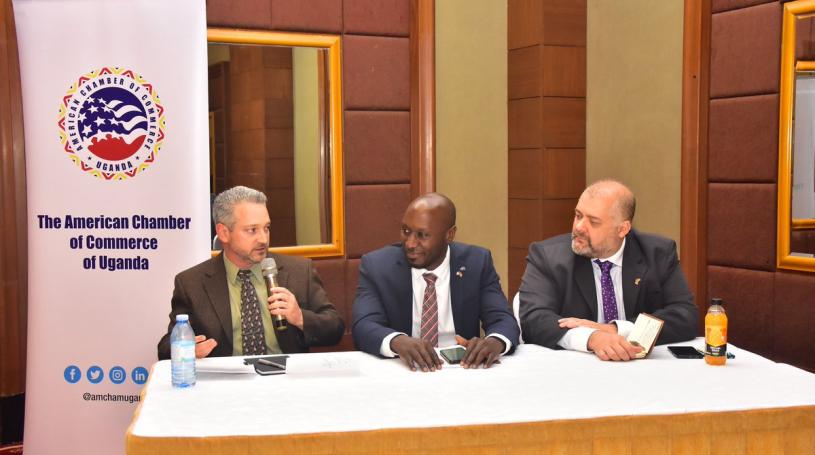 America has been, and continues to be, one of Uganda’s most important strategic development and trade partners. This relationship stretches back to the day Independent Uganda was born.

A new era was jumpstarted when President John F. Kennedy wrote a congratulatory message to Prime Minister Apollo Milton Obote upon Uganda’s attainment of self-rule on 9th October 1962. On the same day, the American consulate general at Kampala was upgraded to embassy status with Olcott H. Demming as interim Charge D’ Affaires.

Since then, America has been a close partner, supporting almost every sector in Uganda’s development. Furthermore, American companies have been game changers, bringing major investments and services that have created thousands of jobs and improved the welfare of locals. These companies are too many to name and some of which are our members  like Coca-Cola Beverages Africa, Ernst & Young, Sheraton Hotels, Price Waterhouse Coopers, etc.

In terms of goods and services, Some of Uganda’s imports from the US have included much needed agricultural inputs, aircraft, machinery, electrical machinery and medical instruments. Exports have included coffee, spices, art and antiques, precious metal and stone etc.

Despite competition from China and other big economies, The US will continue to be a major player in Uganda’s socio-economic advancement due to 3 major factors, among others:

Trade Protocols: The US has signed trade agreements with the East African Community (EAC) and Common market for East and central Africa (COMESA). Uganda is a member of both regional blocks and benefits from these arrangements. However, the biggest move by America to open up their market to Africa was the enactment of the African growth and opportunity Act (AGOA) in May 2000. AGOA provides eligible Sub Sahara African countries with duty free access to US markets for over 6000 non arms products. Uganda is one of the countries that are eligible, though, due to low capacity, this opportunity has not been maximally utilized. Originally, the government had identified garments as the main export to utilize this treaty, however, the project hit a dead end due to allegations of mismanagement.

Increased Interest in Uganda by American Investors: In recent years, thanks to the efforts of the American Embassy, The Chamber (AmCham Uganda), Private Sector foundation Uganda (PSFU), Power Africa program and the government, more American investors are picking interest in Uganda.

In early 2020, a team of African American investors arrived in Uganda, led by Mark Antony Hernandez. They held meetings with Ugandan partners and expressed their wish to invest up to $300 million (Ug. Sh 1.1 trillion) in the health and real estate sectors.

Furthermore, The Chamber (AmCham Uganda) was involved in hosting 21 American Agribusinesses that sought to partner with 24 Ugandan firms to exploit the export opportunities under AGOA. The Observer newspaper, a local Ugandan paper, reported last year that these partnerships were meant to step up Uganda’s production and capacity of the agricultural sector.

More recently, in April 2021, Uganda was excited with the visit of the famous US celebrity musician and investor, Akon (real name: Aliaune Thiam). The government declared plans to offer him land to build a futuristic city in the country.

Social impact of American investment and support: It goes without saying that America has historically been perhaps the most loyal ally when it comes to Uganda’s social development. Through the US  Mission, USAID and other international American funded agencies, immense support has been given to the refugee cause, environmental protection, education, health etc.

The American people, through the US Agency for International Aid (USAID) have made an undeniable impact on Uganda’s human capital development. In a statement released on July 30 2020, USAID reported that “The US government is the single largest donor to Uganda’s health sector, contributing 32% of total health spending in Uganda every year and accounting for 76% of all foreign contributions to Uganda’s health sector”. Indeed, US support has been pivotal in the fight against Tuberculosis, Malaria and HIV/AIDS in Uganda.

It is time that Ugandan Government and the Key American Stakeholders leverage these dividends and take the trade relationship to another level.

Join us for our upcoming webinars on fascinating topics. You are guaranteed to learn something from the experts in these topics who are also our panelists.

We shall be making announcements on social media. Follow us for details: